Yes I Bought a Convertible

Not just any convertible, it’s a 2004 Mustang GT.  I figured if I’m going to do it, I will get exactly what I want, as old school as it gets now-a-days, with all the creature comforts of a modern car. V8 muscle, sport suspension, 5 speed standard transmission, air conditioning for those Okanagan summer days when it’s just too hot to have the top down, a great stereo with a 6 CD changer to blast the music of the 60’s and 70’s, 17 inch aluminum wheels with low profile boy racer type tires and an exhaust system that produces that throaty V8 sound.  It's all about putting the vroom in the vroom vroom, if you get my drift.

If not now, then when?  A simple question really.  I owned convertibles in the 60’s.  They were both British sports cars.  My first ever vehicle was a red 1962 Austin Healey Sprite.  Next came a dark blue 1969 MGB.  It was one of only three brand new cars I bought over the years.

I turned 65 this year and I have beaten cancer.  I intend to enjoy every waking minute.  So, I bought another convertible.  Oh, and one of those bucket type hats with a wider 360 brim to shade the face, neck and ears, and a pail full of sunscreen. 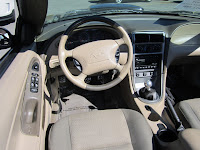 The last car I owned with a standard transmission was a mid-70’s Datsun 610. I hated it, the car not the stick shift.

When we had our second baby in 1978, I graduated to mid-size American cars, then to SUV’s and back to cars.  With every purchase, I tried for more luxury and when possible, more sportiness.

Vehicles over the years

You don't realize how many cars and trucks you've owned until you make a list.

There were two more but they were never driven, a 1952 Volkswagon and a 1959 Morris Minor.

Three cars and a 2-car garage

It’s a true dilemma.  Terrie doesn’t drive and now with the arrival of the Mustang, the Lexus has been relegated to the driveway.  The Mustang is so much fun I may not renew the insurance on the Lexus until it’s time to take the ‘Stang off the road for the winter.  In fact, I may not take the snow tires off the Lexus.  And the Cougar?  It’s tough to justify insurance to go to a handful of car shows, so I've decided to explore selling after 26 years.

But I won’t give it away.  You can read all about the Cougar here.  She needs some very minor body work and a good paint job.  Top and interior are in great shape.  Engine, transmission and differential have all been rebuilt in recent years.  Last summer, I added chrome rims and new tires at a cost of $1500.00.  I also have the original steel rims and high end hubcaps.  If you or anyone you know is interested, I can be reached at tedfarrmedia@hotmail.com.