Speechless, imagine that!  Me the radio guy.  Talk for a living and nothing to say.
It was one of those moments this past week when contacted by the Executive Director of the BC Country Music Association.  Her email said "I'd love to be able to give you a quick call to discuss something quite important".  I sent her my number.

Twenty years ago, I left country radio.  I was Program Director of CKWX, Vancouver's country music station, from 1981 to 1991.  I was also Vice President of the BCCMA at a time when the organization was struggling.  Together we found the keys to what made it relevant again.  A community emerged around the songwriters and performers of the day.  We celebrated their successes by revamping the annual awards show and by creating a yearly convention. 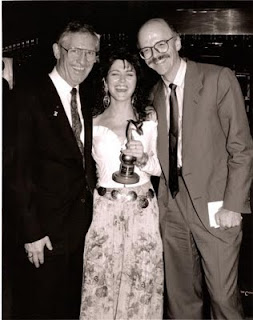 We had a lot of fun.  We connected the Nashville songwriting community with the West Coast, a connection that has endured.  We witnessed the blossoming of several careers.  I think of Patricia Conroy, Lisa Brokop, Ron Irving and Larry Wayne Clark. And, the radio was wonderful.  CKWX was blessed with some amazing talent, on air and off.

It was the late 1980's, at a bar in Whistler, where a partnership was struck between CKWX, Ralph Murphy of ASCAP Nashville, and Gary Taylor.  The result was the crafting of the CKWX Songwriters Competition, one of the true highlights of my career.  The original idea was literally written on a napkin.  In each year of its existence, the competition created collaboration opportunities for BC songwriters to work with and learn from some of Nashville's top songwriters.  All had written or co-written multiple #1 hits.


After CKWX, we moved our family to the Prairies.  First it was Winnipeg, then Calgary and finally Saskatoon.  Nearly 20 years.  I returned to my roots in radio by building or rebuilding stations in the News Talk format.  The early years of my career were spent in news and sports as a news and sports anchor and News Director.  A little more than two years ago, we decided to return to BC.  I became a consultant.  You know, that self described "expert" with a briefcase who comes from more than 100 miles away.  I specialize in the coaching of on air talent and the analysis of radio programming.


So, here's the speechless part.  The phone rings.  It's the call from the BCCMA Executive Director with word that they will induct me into the BCCMA Hall of Fame on April 23, 2011, Saturday night on the Easter weekend. The ceremony will take place at the Red Robinson Theatre in Vancouver.  I am deeply honoured.


At a stage in my radio career when I am once again a free agent, perhaps this is an omen.  Maybe I'm suppose to return to country radio.  That would be a good thing.  Stay tuned!