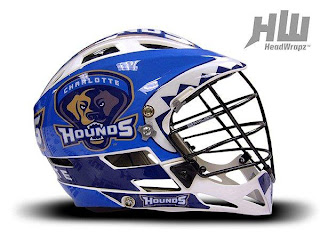 Two training camp weekends and one exhibition game before the coaching staff would make their final roster decisions.  Sure doesn’t seem like much time to evaluate players new to the expansion Charlotte Hounds of the Major Lacrosse League!

For 31 year old Devan Spilker, it’s been months of hard work in the gym.  He lost 30 pounds and put game-shape back into a body more accustomed to the good life than competition in recent years.

The train ride form Baltimore Maryland to Brooklyn New York on Saturday April 21 felt way longer than it really was.  He had made the exhibition game line-up so had the chance to show his stuff against the MLL Long Island Lizards.

Hounds Head Coach Mike Cerino recruited Devan to Limestone College in 2000.  Spilker piled up numerous scoring records, All Conference and All American accolades during his stellar college career, while leading the Saints to NCAA National Championships in 2000 and 2002. Cerino knew the type of player and human being he had drafted 122nd in the MLL supplemental draft.  What he didn’t know was whether Devan still had the stuff to be a winner.

The Hounds coaching staff had Spilker running as the #4 attack on Saturday night.  He was the go-to relief for the three starters and saw some good field time.  No points, but had one good ripper from the outside and no mistakes.  He was pleased with himself.

"It felt like I was a freshman again, playing in my first championship back in 2000.  That was over 12 years ago”, said Spilker.

As he came back to the sidelines, he couldn`t wait to hear his number called again.  The Hounds won it 13 - 8.

The rest of the weekend was fretful.  Devan didn`t sleep all that well on either Saturday or Sunday night.  He knew he`d get the call sometime on Monday.  Around 11 AM, an email arrived listing the 25 man roster for the Hounds inaugural season.  Spilker was in tears.  At an age when many players retire, he was now officially a professional and an MLL rookie.  The hard work had paid off.

His first phone call was to his wife and best friend Katie.  They made a date to celebrate on Monday night.

The next calls were to his parents and his lacrosse playing brothers.  Devan was so proud to tell them the news.  It was especially sweet to hear the congratulations from older brother Brendan who he had idolized growing up and who he had followed to Limestone College.

The phone call from Coach Cerino came around 3 PM.  Spilker was pumped as Cerino told him how happy he was with his play, his conditioning and his attitude.  Cerino said, "Devo, your best lacrosse is still ahead of you."

The Hounds team roster is 25 but the playing roster will be 19.  For Spilker, the work has just begun.  There`s no way he will be complacent.  His goal is field time, as much as Coach will give him.  Now that he has made the team, Devan says, I want to prove I can play in this league.  He will wear his old college number - 15 and these very cool Hounds gloves.

Not over 'til it`s over

As the MLL season unfolds and the Hounds find out how good they are, the Devan Spilker story will be updated from time to time.  Enjoy the moment Devo, you deserve it!  Your family and friends are all cheering.  Devan Spilker lives the Limestone Saints motto.


"If you couldn't play tomorrow, how hard would you play today"
#17