#17 - The Real Deal Tradition of the Limestone Saints Lacrosse Program

It was late January of last year when I got an email from J. B.Clarke, Head Coach of the Limestone Saints Men’s Lacrosse Team. He told me the team had decided to launch a new tradition honouring the memory of our son.

Throughout his four years as a key member of the Saints, Jonathan wore #17. He is one of those players who became known by his number. To this day, you say 17 to his lacrosse friends and they all know instantly who you are talking about. Such was his legacy.

He was the first Canadian to play at Limestone, led the team in goals for two of his four years and left a mark enlarged by his untimely death in January of 2008. Jonathan was a skilled goal scorer with hands honed in the old school ways of Canadian Box Lacrosse. He had a nose for the net, a hard shot, quick release and enough stick tricks to move a goalie in close. He was big at 6’2”. His playing weight was around 220 pounds. He wasn’t the fastest guy on the field but he wasn’t slow either.

Jonathan was not a perimeter player. He could carry defenders on his back while working the ball in a three foot radius. He was the one you wanted down low, in the slot or on the crease. I remember a championship tournament when he was playing Junior A Box Lacrosse in Manitoba, at the age of 16. He had pulled a groin so badly that he was dragging a leg, couldn’t run. The coach insisted that he be taped up and play. For every power play, the team slowed the game and waited for Jonathan to set up on the crease. Then, they fed him the ball. They lost the game unfortunately. In total they had 4 or 5 goals. Jonathan had 2 of them, along with an offer to join a Junior A team in Ontario the following season.

The Limestone Saints tradition goes like this. The player who wears #17 is asked to study Jonathan’s story. He then has to speak to the entire team prior to a pre-season practice.

The next day back in February 2013, I got another email from Coach Clarke to let me know that they had added another wrinkle to the tradition. Once the 2013 player graduated, #17 would be special, to be worn only by a Canadian. An email this year confirmed the first Canadian recruit to be assigned #17. 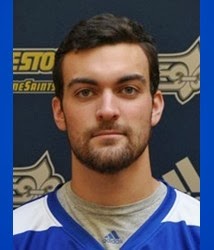 He was born and raised in Burlington Ontario. He took his first breath in April of 1993, the year before Jonathan signed on as a Limestone freshman. Colton played lacrosse, hockey and football through high school and last year was a member of the Oakville Buzz of the Ontario Junior B Lacrosse League.

At Limestone, he is majoring in Sports Management and Business Marketing.

Colton is one of the tallest players on the roster at 6’4” and is a solid 195 pounds. As a freshman midfielder, he scored twice in his first ever Saints game.

Colton tells the story of #17

Coach Clarke sent this photo of Colton as he got ready to speak to the team. 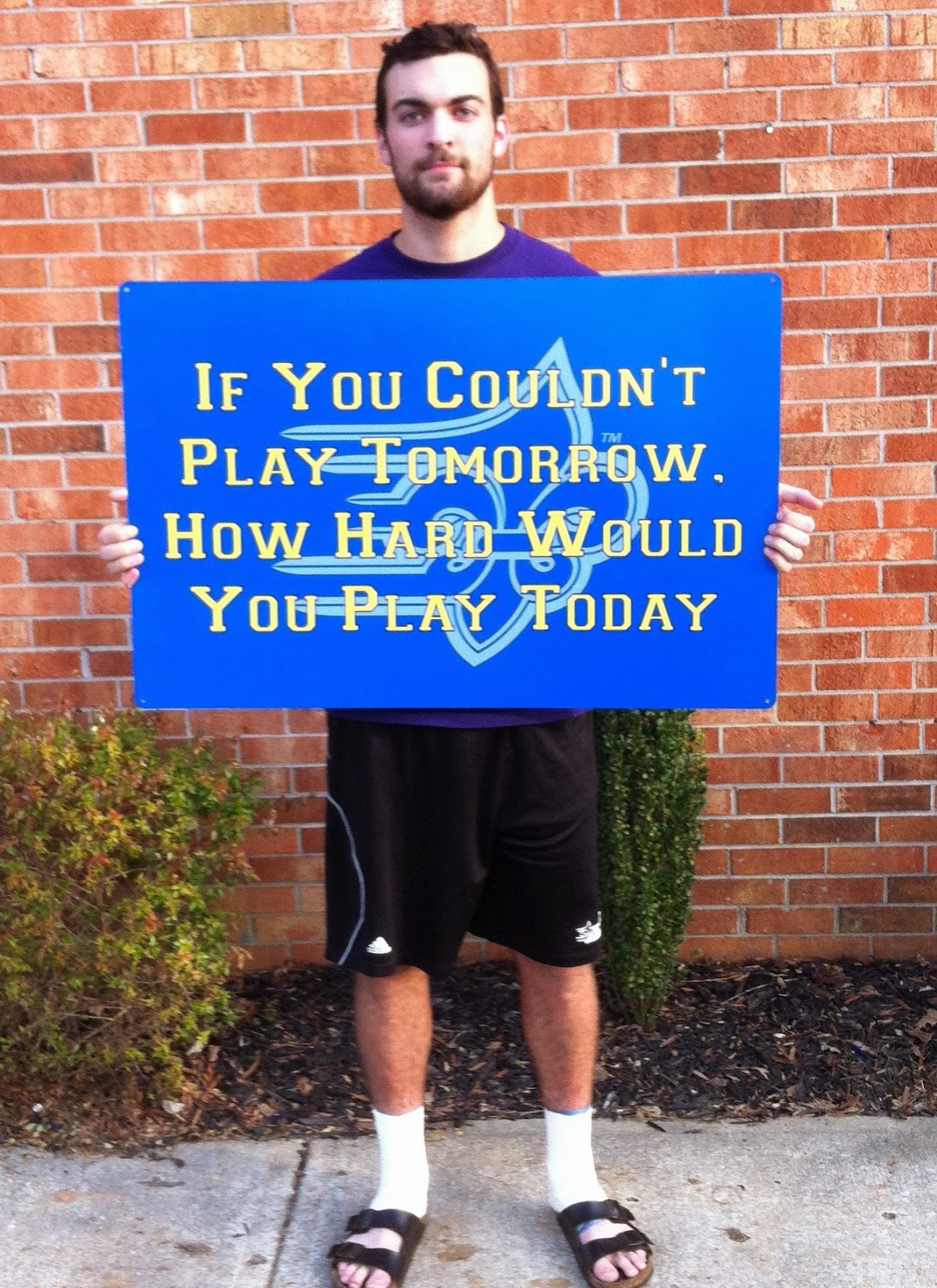 The next day, I got an email from Colton. Here’s what he said.


First off I would like to say that I am honored to have the opportunity to wear your son’s number for the duration of my time here at Limestone. After reading the article about him I can tell that he was a highly respected and valued member of the team, not just because of his skill at the game of lacrosse but because of the effort he put forth every day to get better at what he loved to do. I spoke to the team yesterday about Jonathan and the motto "If You Couldn't Play Tomorrow, How Hard Would You Play Today" and the team really responded to that message in practice. I look forward to staying in touch with you for the remainder of our season.

I first became aware of the motto in 2008 at Jonathan’s memorial party in one of his favourite bars in Baltimore Maryland where he had lived for several years. That night, Brian and Brad Bauer presented me with a Limestone Saints Championship ring. Brad Bauer was the first player to wear #17 after Jonathan graduated. Brad was a member of the national championship Saints teams in 2000 and 2002.

This is Brad’s 2002 ring. Etched into the side of it is the motto “If You Couldn’t Play Tomorrow, How Hard Would You Play Today?” Brian and Brad told me that it’s the ring Jonathan should have won. I have worn it ever since.

The motto says it all for me. It’s a reminder to attack every day as if it’s your last. Put everything you have into whatever you do. Live life with no regrets. Always play to win.

Congratulations Colton! Wear #17 with commitment. Do yourself and the Saints proud and win a ring.