Gordie Howe and Me

I was born and raised in Southern Ontario and played most of my minor hockey in a village southwest of London called Mount Brydges. At the time it’s population was 780 people. Our fathers and coaches had to drive us or carpool us to the next town where they had an arena. We were a part of the Strathroy hockey program. All we had in Mount Brydges were hoses and backyards.

Before the dawn of the Junior Hockey Draft, the original six NHL teams had protected territories. Every player with dreams of a pro career was already spoken for and we were protected by the Detroit Red Wings. Mount Brydges and Strathroy were in Red Wing territory. That was in the late 1950’s.

I collected hockey cards before my Dad bought our first TV

There were two players you just had to have, Gordie Howe and Rocket Richard. It didn't matter if you were a fan of the Red Wings or the Canadians, you knew all about greatness. They were the pinnacle of schoolboy collecting back then.

The card to the right is from a set collected in 1960. It isn't in great shape unfortunately, but I have it. Some of Howe's earlier cards are valued in the thousands of dollars. The card considered his rookie, can sell for upwards of $10,000.

It was 1955 on a Saturday. I was 7. My Dad traded our train set and layout for a TV. He let me stay up late to watch the game with him. It was the Toronto Maple Leafs against the Detroit Red Wings with all the Red Wing greats, Gordie Howe, Glenn Hall, Red Kelly, Alex Delvecchio, Ted Lindsay and more.

So you see, the Red Wings were some of my earliest hockey memories, although they were definitely not my team. My father cheered for the Leafs and after a brief flirtation with the Montreal Canadians, I became a Leaf fan too. The first NHL games I witnessed in person were with my father in the standing room section at the top of Maple Leaf Gardens in downtown Toronto. That was the early 1960’s.

Gordie Howe would come into my life three more times 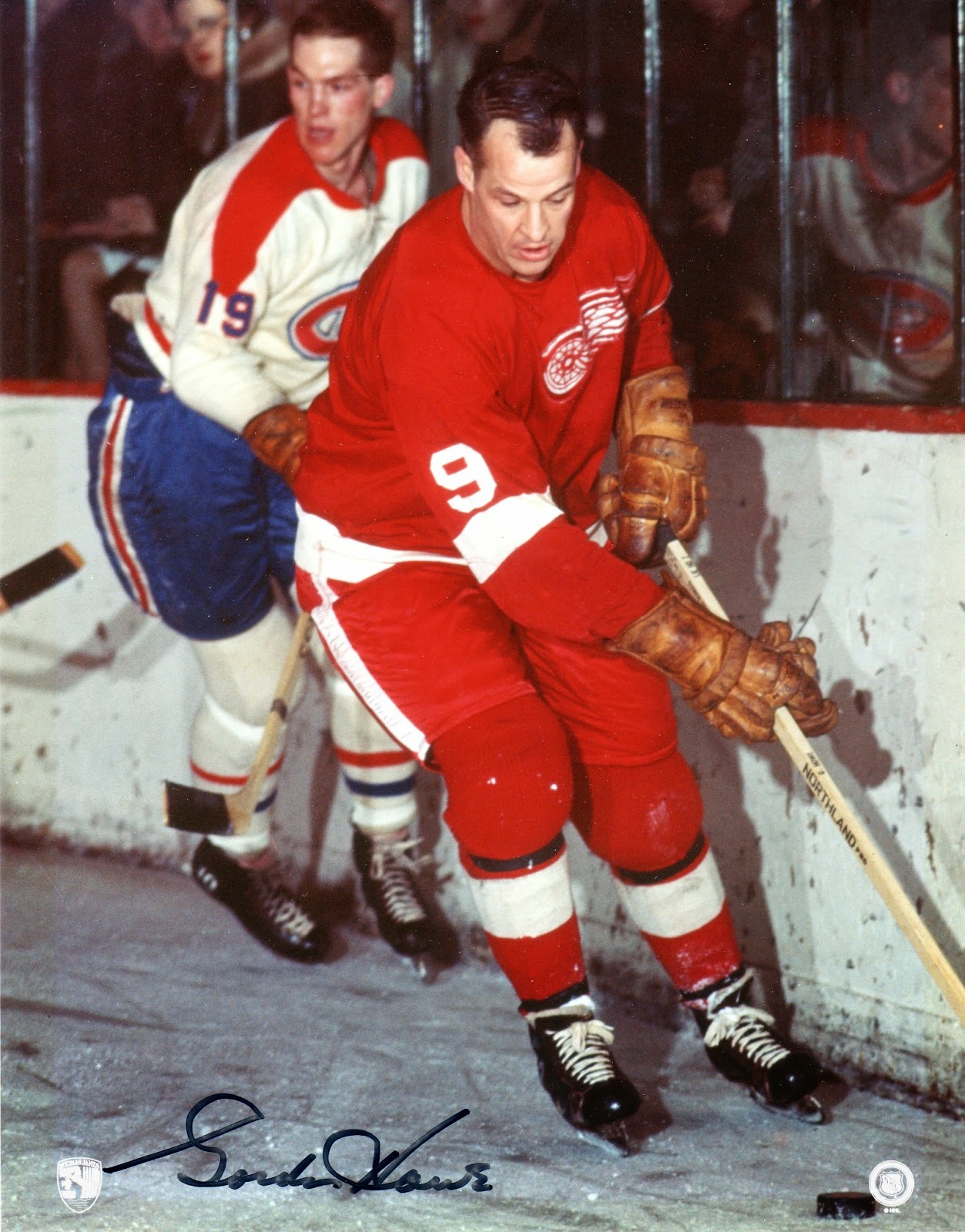 The first was the summer of 1965. My family had moved from Toronto to Vancouver. I had a part-time job pumping gas at an Esso station on the west side of Vancouver.

I had my first job in radio at CKLG Vancouver. The General Manager of the station was well connected and had managed to arrange for Gordie Howe to be a guest at his son’s minor hockey wrap-up party. He asked me if I wanted to interview Number 9. It was a Saturday afternoon. I drove to the GM’s house. My first career interview was about to be the legendary Gordie Howe. He was gracious and patient with the rookie reporter as I fought back my nerves to ask him questions. I have no idea what I said or what he said.

Terrie and I were in Vancouver staying at the Westin Bayshore next to Stanley Park. I was strolling through the lobby and there was Gordie Howe talking to a few people. Turns out he was on the West Coast to celebrate his birthday. As part owner of the Vancouver Giants Junior Hockey Team, they had invited the city to a game to sing Happy Birthday to Gordie. I approached him, only to be stopped by his son Marty who said, Mr. Howe is not signing autographs. I explained that I just wanted to say hello. When it came my turn, I told Gordie about my first career interview. He smiled, then laughed and said, “did I hurt you”?

Mr. Howe was born in a farmhouse on March 31, 1928. He was one of 9 children. The family moved to Saskatoon when little Gordon was 9 days old. At the age of 16, he left home to pursue his hockey career. He played his first game in the NHL for the Detroit Red Wings at the age of 18. He retired from pro hockey at the age of 53.

The City of Saskatoon honoured Mr. Hockey by naming a park after him as well as an outdoor stadium. There is also a bronze statue of Number 9 outside the Saskatoon Arena, home of the Saskatoon Blades Junior Hockey Club. Howe was noted for his sharp elbows throughout his career.

The sculptor captured the man perfectly

Mr. Hockey Gordie Howe tops any list of the greatest players of all time. He, Wayne Gretzky and Bobby Orr are the undisputed best of the best. He was a great goal scorer and fighter. His elbows grazed the chins of many rookies and veterans.

He was known for the Gordie Howe Hat Trick, a goal, an assist and a fight. But, here's the thing about legends. Sometimes the aura of the person supercedes the real story. He apparently only did it twice in his lengthy NHL career. Both of Gordie Howe's Gordie Howe Hat Tricks happened in the 1950's and both were against the Toronto Maple Leafs. The all time leader in this tough SOB category is Brendan Shanahan.


Penticton BC's Larry Lund was Gordie Howe's center with the Houston Aeros in the World Hockey Association. They are friends to this day. In Larry's words, Gordie Howe is a great person with an incredible attitude. Nice to hear about someone idolized by so many for so long.