Never too Old for Ink

You can’t go anywhere anymore without seeing men and women with tattoos. They are young, they are old and all ages in between. Some tats are small, some are large. People have them on their legs, their arms, backs, necks, hands and feet and in places so private only the chosen few are allowed to see.

There are words and symbols, hearts and flowers, snakes and dragons, dogs and cats, barbed wire, devils and spikey things.

If you can imagine it, no doubt someone has that tattoo

I have spent countless hours observing tattooed people at the mall (it’s a professional thing). Some are stereotypes, men with too much muscle, odd haircuts and shirts that began life in the underwear department. Their female companions tend to wear really tight low cut pants (seemingly no underwear) and shorty tops revealing ink that disappears down the inside of those tight pants making you imagine what the whole show looks like. Some are just regular people like you and me except for the tattoo or tattoos, often small and hopefully meaningful to the person who paid good money to have an artist inject ink into their skin at some ungodly pin-prick rate per minute.

Some tattoos appear to be just stupid

But I suppose they made sense at the time. Tattoo artists make big money turning those mistakes into something else at a much later date. I knew a guy who had a mean looking court jester tattooed in black ink on his upper arm. It was transformed from a scowling menace to a multi coloured entertainer by a clever ink master. And what do you do when you are no longer involved with the boyfriend or girlfriend whose name you had permanently displayed on your body. Tattoos are not just for the young and beautiful and they are not always rated PG. As our doctor told my wife and me, she has seen tattoos literally where the sun don’t shine. She is no longer shocked or surprised by either the ink or metal. I guess some people also have piercings in the most intimate places.

Ours was not a snap decision

My wife Terrie and I have talked about getting tattoos ever since our son passed away suddenly at the age of 32. As the trauma and the grief transformed into warm memories, as we once again found the joy in the celebrations of our first born, the idea of tattoos became more and more important.

My relationship with our son revolved around sports 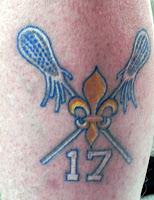 He was an elite athlete in both hockey and lacrosse. It was lacrosse that provided him the opportunity to earn his university degree. He was such a good player (and the first Canadian to play at his school) that he became known by his number - 17. I honour him now by having his team logo and his number permanently inked on the outside of my left calf.

His school was Limestone College in Gaffney South Carolina. The team nickname is The Saints. This logo is the one they used from the beginning of the program until it was changed a few years ago.

For Terrie, the artwork decision wasn’t so obvious

She wanted his name on her body. She wanted an image that made her believe our son is always with her. She wanted the tattoo in a spot where she could easily see it but could still be seen by someone else. She wanted something simple but not a stylized heart. She looked at hundreds of images and fonts for the letters. Nothing was giving her that special feeling. Then it hit her, a mother’s hand holding a child’s hand. And, my wife’s handwriting is better than any font she had seen. She wrote out our son’s name and the artist drew the hands. The combination is now tattooed on the inside of her left arm.

An experience of a lifetime 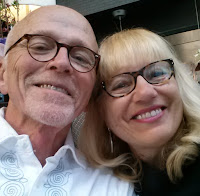 Here we are, husband and wife, 40 plus years of marriage, both in our 60’s, going to a tattoo studio where the artist loaded his gun with various inks and we paid him to cause us pain for an hour each. Yes it hurts but we’re happy about it. The needles came in sealed bags. All surfaces were scrubbed with antiseptic solution as we watched. There was a sterilizer unit right there on the desk and he wore rubber gloves. He also rides a motorcycle which speaking of stereotypes may be one of the oldest. Back in the day, the 40’s, 50’s and 60’s, the only people you ever saw with tattoos were sailors, former convicts, motorcycle gang members and sideshow freaks.

There’s an old joke (not a very funny one at that) about getting a tattoo, riding a Harley Davidson and scaring small children.

There are still people who get tattoos for shock value

Others would call them “statements”. Our tattoo artist told us that the oldest person he has ever inked was an 82 year old woman. She lived in a nearby old folks home. She had him design and ink a snake, wrapped around her ankle and up the side of her leg. She delighted in showing the other folk at the home her risky, crazy, sexy side. Good for her and us and you.