Of Mice and Men or is it Gophers 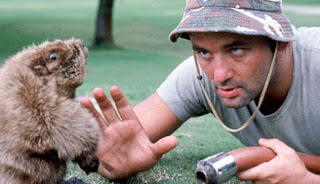 For more than two years I have felt more like  Bill Murray in Caddyshack than a gentleman gardener.  The pleasure of tending to lawns, gardens and shrubs has been spoiled by a rodent intruder.  Gophers are rodents right?  The battle raged almost daily as small mounds of dirt appeared overnight and tunnels caused depressions under the grass.  And, the failures mounted.  The gopher was winning big time! 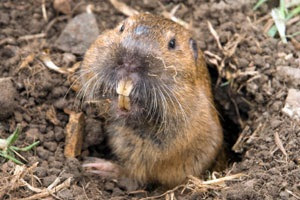 Here’s a picture.  Check out the teeth.  They use them to dig.  A Pocket Gopher is about the size of a rat.  Pointed face, brownish fur, stubby tail, powerful front paws to move the dirt excavated by those teeth.  They seem to survive on the roots of the lawn and if they find your garden, expect some of your plants to simply disappear.  This year we lost a green pepper, a hot pepper and several lettuces. 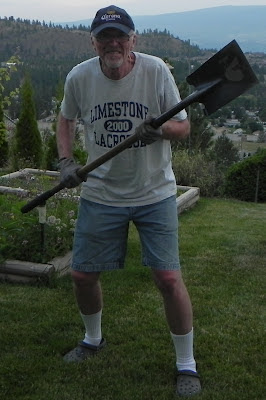 Wars are waged with a series of battles.  I’ve been the big loser in this war until recently.  We were erecting an above-ground pool when I saw something moving in the garden.  I grabbed my spade.  As quietly as possible I snuck up on the critter foraging for food.  Whack!  And, whack again.  One dead Pocket Gopher.  We stood there and cursed its very existence.  With a flick of the shovel, the carcass was launched into the field below our property.  That particular Pocket Gopher became Coyote food.

Was the Pocket Gopher working alone?  Was this the rodent responsible for my grief?  Will we now have a summer free of mounds of dirt?  Will the lawn grow back in the damaged area?  Has the gopher made me a little bit crazy?  Am I really just channeling Bill Murray?